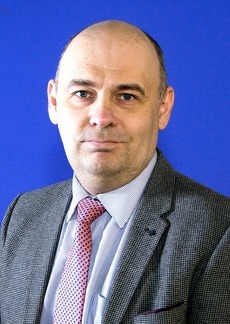 Denis Vitalievich Ozerkin has been working in the field of education and science since 1999 after graduating from the graduate school of Tomsk State University of Control Systems and Radio Electronics (TUSUR). In 2000 he defended his thesis on technical sciences. The dissertation was devoted to the study of the temperature stability of electronic equipment operating in extreme operating conditions. The results of the dissertation were introduced into the educational process at the Department of Design and Production of Radio Equipment (CYPR). On this issue, under the direction of D.V. Ozerkin, in 2019, one of the graduate students of the department of RETEM completed a dissertation research.
In June 2009, the TUSUR Radio Engineering Department was headed by a new dean, D.V. Ozerkin. One of the main problems that had to be solved from the first days of management was ensuring the proper quality of the new set. The effective work of the faculty selection committee under the chairmanship of D.V. Ozerkin for ten seasons gives its results: first-year applicants from Tomsk, the Tomsk Region, other regions of Russia and the near abroad are enrolled. The quality of the recruitment of applicants is subsequently confirmed when, according to the results of the session, students of the radio design department show one of the highest performance indicators among technical departments.
In recent years, employers' interest in graduates of the radio design department has grown markedly, especially in the field of “Design and technology of electronic tools”. In this regard, in 2014, on the initiative of D.V. Ozerkin and with the support of the leadership of TUSUR, the base department of Polyus Scientific and Production Center JSC Designing Radio-Electronic Means was created. The presence of such a basic department makes it possible to effectively carry out the whole range of activities on the interaction "university - the enterprise of the military-industrial complex": career guidance with students, the conclusion of targeted agreements for training, summer internships, student internships during the semester, group project training at the enterprise, implementation Research and development work, advanced training courses for employees, graduation of students, employment of young specialists, etc.
For six years, D.V. Ozerkin has been supervising the participation of TUSUR in the competition "New personnel of the defense industry", as a result of which the university is entitled to implement the developed educational programs for students of the target form of education.
D.V. Ozerkin conducts active career guidance work with schoolchildren, teachers and parents. So, under the direction of D.V. Ozerkin, the educational program “The Basics of Designing for the Schoolchild: from Idea to the Object” was developed and is being implemented for the Palace of Creativity for Children and Youth, aimed at solving the priority tasks of additional education for schoolchildren. The project is being implemented as part of a grant competition for the Hometowns social investment program with the support of Gazpromneft-Vostok.
In the list of publications D. Ozerkin - four monographs, about fifty scientific articles and four patents for inventions. In 2015, D.V. Ozerkin was awarded an honorary diploma of the Ministry of Education of the Russian Federation.