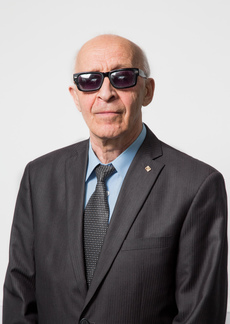 In 1959, after graduating from high school with honors, he entered the Tomsk Polytechnic Institute. In 1965, Alexey Viktorovich graduated from the Radio Engineering Faculty of TUSUR (at that time TIRiET).

After defending his PhD thesis in 1970 at the Department of Ultra-high-frequency Technology, Alexey Viktorovich joined the new scientific direction "Optical information processing". He was appointed scientific supervisor of the topic "Application of acousto-optic methods and devices for processing radio signals in real time".

After defending his doctoral dissertation, A.V. Pugovkin was elected Head of the Department of Theoretical Foundations of Radio Engineering (TOR) in 1985. In 1996, the Department of TOP began training specialists in a new specialty in Tomsk "radio communications, radio broadcasting, television" with a specialization in "digital telecommunications". In 1998, A.V. Pugovkin, without ceasing to work at the department, became the director of a new branch of JSC "Tomsktelecom" - "Digital Information Networks". Together with the team he created, a data transmission network was created in the Tomsk region, which is now the basis of corporate networks and Internet access networks. The construction and operation of this network brought the educational process closer to the real situation in the field of telecommunications.

In 2004, a training and production center for advanced training of specialists was established at JSC Tomsktelecom. A.V. Pugovkin becomes the director of the center and again creates a team from scratch and organizes its work. From 2004 to 2008, more than 1,000 specialists were retrained.

Author of 6 monographs, 12 inventions, 3 patents and more than 150 scientific publications in the Russian and foreign press.For his fruitful scientific and pedagogical activity, Professor A.V. Pugovkin has been repeatedly awarded with distinctions and numerous certificates of honor.