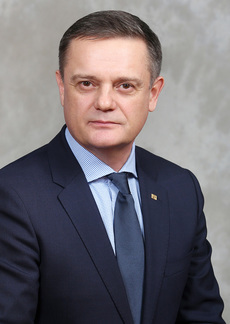 Dr. Kobzev graduated from TUSUR University in 1994, he holds a Specialist (Graduate) degree in Industrial Electronics as well as Doctor of Philosophy degree (Candidate of Science in Russian system) in Power Electronics.

In 1999, he received the Master of Science degree in Electrical and Computer Engineering from Kansas State University, Manhattan, US.

In 2007, he completed training at the Haas School of Business, University of California, Berkley ,a program in Technology Entrepreneurship Education.

In 2001, he participatedin the Business for Russia program for study of administration practices in US universities. The international part of the program was based in the University of Missouri in St. Louis and Webster University.

In 2003 Gennady Kobzev completed MBA-format program at the Russian President Management Training initiative. He completed an international internship program at Oxford Innovation, a consulting company specializing in commercialization of R&D results at the University of Oxford and other institutions.

In 2012—2013,he received training at Moscow School of Management SKOLKOVO, a program titled New Leaders of Higher Education.

Gennady Kobzev manages the development and implementation of joint programs between TUSUR and its international partner universities, including dual degree programs with Ritsumeikan University in Japan, State University of New York in USA, Limoges University and the University of Bordeaux in France.

In 2002, he initiated the University’s participation in the Bologna Process to ensure comparability in the standards and quality of higher-education qualifications. Gennady Kobzev was the executive manager of the Russian pilot project on developing International credit transfer system in 2003—2005, implemented together with the universitiesof Germany and the Netherlands within the TEMPUS program.

In 2004, he actively participated in establishing the Student Business Incubator, a key element in the entrepreneurial infrastructure of TUSUR University designed to promote technology entrepreneurship among students.

His research is focused on dynamic process modeling for complex nonlinear power electronic systems, development of theory and methods for nonlinear system analysis at large. GennadyKobzev’s research findings have found application in the Russian and international industry practice.