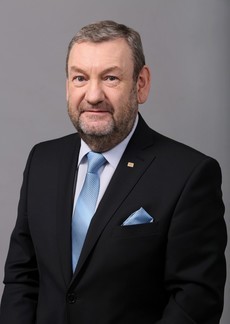 In 1993, Professor Shelupanov joined the team of Tomsk State University of Control Systems and Radioelectronics, in 1999 becoming Head of the Department of Complex Information Security of Computer Systems. In 2008, he created and became Director of the Institute of System Integration and Security at TUSUR University.

From 2010 till 2014 he was Vice-Rector for Research, and from 2014 till 2019 he held the position of Rector of TUSUR Univeristy. In 2019, Professor Shelupanov was elected University President.

Professor Shelupanov initiated and is currently leading fundamental and applied research in design and engineering of complex information security systems at TUSUR University.

His research and teaching expertise is reflected in more than 500 publications, including 13 monographs, 48 study guides and textbooks, 25 patents and certificates of software registration. Professor Shelupanov has provided research guidance to 30 Doctors and Candidates of Science.

He is Deputy Editor in Chief of Proceedings of TUSUR University, Member of Editorial Boards of Symmetry, Informatsionno-Upravlyayuschiye Sistemy, Informatika i Sistemy Upravleniya.

Professor Shelupanov is a Federal Expert of the National Eccreditation Agency and a Research and Engineering Expert of the Federal Research Center for Project Evaluation and Consulting Services.

In 2000, Professor Shelupanov initiated the creation and is currently the head of the Siberian Regional Branch of Information Security Education Union of Russian Universities. The Union coordinates the academic activities of 25 universities of Siberia and the Russian Far East that offer degree programs in information security and data protection.